Well, the glacier is pulling back and we’re seeing Spring arrive here, and not a minute too soon. Relegated to mostly indoor shooting for the past six weeks due to frigid temperatures, I did have the privilege of joining the Burnett Hockey League in Greenwich, CT,  for some of their playoffs and the game for the Cup. (Tip: cut the fingertips off some work gloves from Home Depot to shoot while keeping your hands warm!) What’s the Burnett Hockey League? From their website: The Burnett Hockey League is a backyard league in Greenwich CT hosted at Rob Burnett’s house. It is what you get when you marry mediocre hockey talent to a completely disproportionate amount of overthought hoopla. What this translates to is a bunch of guys about my age tearing up the ice at the producer of the Late Show with David Letterman‘s house. Burnett was a writer for Letterman long before he became a producer, and as he was at the microphone narrating the game play the jokes were non-stop and hilarious. Great time had by all! Michael Ferdman of Firstborn fame (and founding) put together some great materials for the Cup event, seen below.

Also, below spot the Thank You cards from Craig and Abby’s wedding – I love seeing our shots in print every month, no matter where they appear! 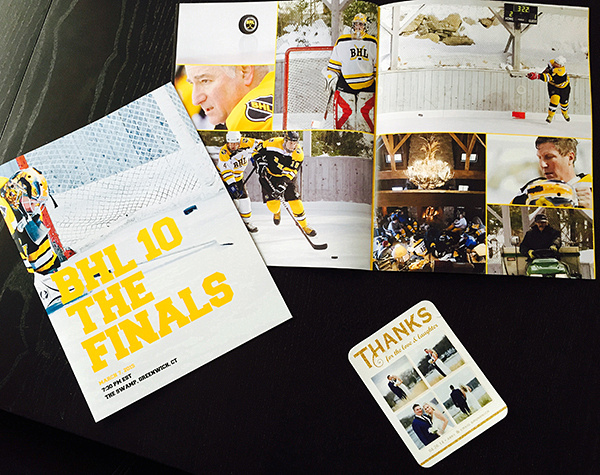